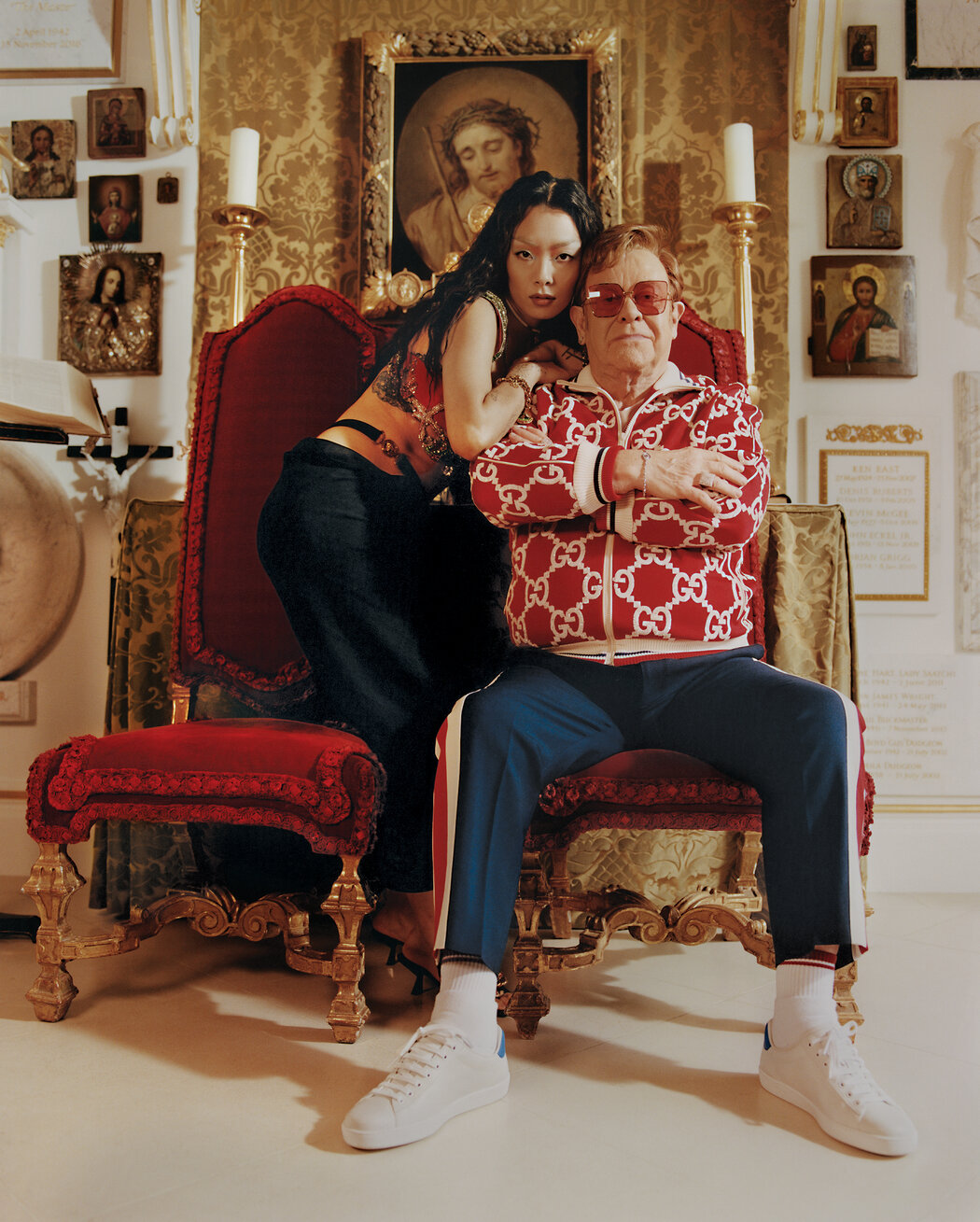 The rising star and the established icon who’ve discovered they have a lot in common.

Few albums last year did more to rewire the notion of what pop music’s future might sound like than Rina Sawayama’s debut, “Sawayama.” The touchstones were eclectic and invigorating: nu-metal, shiny 2000s megapop, glam club tracks, rap-rock and more. It was both audaciously theatrical and also deft at deploying theatrical modes as the foundation of a new sincerity, one somewhere out beyond camp or kitsch.

In this, it found obvious kinship with Elton John, who has been an exemplar of baroque pop for decades. More than any superstar of his generation — and even those that followed — John is also a curious and ravenous consumer of the new in pop. He hosts “Elton John’s Rocket Hour,” a weekly radio show on Apple Music that plays up-and-coming artists alongside classics, and is a frequent on-record collaborator and behind-the-scenes encourager to a host of young performers. As soon as he came across Sawayama’s music, John was smitten, and reached out to her to express his admiration.

John, 74, and Sawayama, 30, found they have much in common. During his breakout years in the early to mid 1970s, John was something of a pop heretic as well, a rock icon steeped in glam, psychedelia, blues, you name it. Both singers are outspoken about their politics and motivated by passion and care for the queer community. They also brandish imaginations global in scope. John has lately been agitating for government intervention on behalf of young British musicians left logistically stranded in the wake of Brexit. And recently, thanks to intense lobbying from Sawayama — who was born in Japan and raised in England — the British Phonogram Industry extended eligibility for the BRIT Awards and the Mercury Prize, the U.K.’s marquee music prizes, to artists who’ve resided in the United Kingdom for five years, expanding the frame of what it means to be British.

After getting to know each other over the phone during the pandemic, the two singers met for the first time, following strict safety protocols, in a London studio in December so that they could record a collaborative version of Sawayama’s song “Chosen Family,” which will be released this month. In February, I joined them as they reconvened over Zoom — John in his music-filled home office in Old Windsor, Sawayama in London — and discussed everything from avoiding stylistic ruts to cosmopolitanism and the suffocations of heterosexual love songs. Below are excerpts from the conversation.

Elton John: Rina’s album, “Sawayama” (2020), just blew me away. I had to call her up and tell her how brilliant it was. I mean, it was Led Zeppelin meets Prince meets a couple of things that referenced Madonna. I think her songs “Bad Friend” and “Chosen Family” Madonna would have killed for. It was so many musical influences, but done in her own way, so it didn’t feel like pastiche.

Rina Sawayama: Thank you. Wow. It came from me being really bored between songs I was writing. I didn’t want to write only the same genre, because that wasn’t my taste. My taste was varied. And I thought, this is the one time I can make my debut album, so I’ll just do it how I like.

E.J.: It was nothing you can pigeonhole. It was like hearing, I suppose, the Mothers of Invention in the late 1960s. When I heard Rina’s album I thought, Jesus, this is really daring. It’s fantastic. It made me want to meet this person. It was like, “Who are you?”

R.S.: Elton doesn’t realize how many people’s lives he’s made by contacting them and telling them that their work is great, that the work is seen. And I was so amazed, when we met, by how much he knows about new music. I was ashamed because I don’t know anything, especially when I’m writing. I’m too scared that it’ll worm its way into my head.

E.J.: You’re so good. You don’t need to bastardize it with anything else. You just keep your mind and write the stuff you do. That’s the confidence she projects on this record. This woman, she’s full of ideas. The videos, also. For “Bad Friend,” for sure. Now, I’m a huge photography collector. I have one of the biggest private collections in the world. And that video reminded me of a Brassai photograph from Paris. Anyway, we were phone friends at first and then Rina asked me if I would like to record a version of “Chosen Family.” And how could I say no?

R.S.: Those kinds of grand, genuine songs are quite hard to write as a new artist because, for lack of a better word, people think they’re too cheesy. But I love cheese. To me it’s the classic song. Can you write something that stripped down that still blossoms and takes you somewhere? And I felt like it was the perfect marriage with what Elton has been doing his whole career.

Friends Who Create Together

Friends Who Are Muses

Friends Who Are Family

Friends Who Summer Together

Friends Who Came Up Together

Friends Who Teach Each Other

Friends Who Saw It All

Friends Who Inspire Each Other

Friends Who Became Adults Together

Friends Who Cook Together

Friends Who Protect One Another

Friends Who Make Music Together

Friends Who Miss Each Other

Friends Who Create Together

Friends Who Are Muses

Friends Who Are Family

Friends Who Summer Together

Friends Who Came Up Together

Friends Who Teach Each Other

Friends Who Saw It All

Friends Who Inspire Each Other

Friends Who Became Adults Together

Friends Who Cook Together

Friends Who Protect One Another

Friends Who Make Music Together

Friends Who Miss Each Other

E.J.: The lyrical content is so beautiful. There were so many brutal things going on in the world when the record came out, especially in America, and yet it made me feel as if all would be OK. I would sing it around the house and I changed the lyrics to “frozen family.” I sang with my kids in the morning, “You’re my frozen family/ just a tiny little fish finger.”

R.S.: I was so flattered because I asked Elton if any of the lyrics or melodies should actually be changed. And it was always, “No, I love it just the way it is.”

E.J.: “Chosen Family” is like a hymn. You can hear it being performed by a gospel choir.

R.S.: It’s funny because I went to a Church of England high school in London where we sang hymns every Monday morning, so that makes some sense. But yes, I really wanted to write a genuine song, something about celebration. And something specific to the queer community. The people who look after each other so much when they’ve gone through so much themselves — the whole song is meant to be a message from a safe space. My friends are basically all queer and I’m from the community. The stories I hear from them, about being kicked out of home for being gay, for example, or not being able to come out to their parents, even at 28 — a lot of trauma and real stories went into it. It’s so close to my heart. And while it’s specific to the community, it was also interesting when someone straight was like, “Oh, I can imagine this playing at a wedding.” I guess chosen family can mean that as well.

E.J.: You should bring the world together as a musician, that’s your job. I truly believe that as a musician, you travel and see for yourself. There’s nowhere that I have been treated badly. I mean, yes, I’ve played in Arab countries where people have said, “You shouldn’t be here because you’re gay,” but the audiences have been great. I was so upset when the U.K. left Europe because you know, we need to come together more than drift apart. I’m a staunch believer in that. It was such a colossal mistake.

R.S.: I actually haven’t traveled that much, because this is my first record and I haven’t been able to tour it. But my version of travel is social media. I get messages from people in Kuala Lumpur, from people in Turkey. I have fans who are L.G.B.T.Q. in countries where it’s illegal to be. It’s nice to know that the music resonates with people. And not necessarily people from the community or people who I intended the song to be for, you know? That’s what I want to do. What they say about queering a space, that’s kind of what I’m trying to do with music by injecting a bit of an interest in areas other than heterosexual love. I feel the pressure of having to write heterosexual love songs. Like, I just genuinely can’t. I’ve tried.

E.J.: Initially my collaborator, Bernie Taupin, wrote songs that I knew were about women and I didn’t care. But as he came to know who I was sexually, you can take any of our songs written after about 1974, and they can apply to a man or a woman. Because you know, for me to go onstage and sing, “Oh, Maria, I love you so much.” It would be crazy.

R.S.: Although, obviously you, Elton, are so theatrical. Gaga, so theatrical. The songwriting is like a musical. I love Disney songs. I love theater songs. Songs that really get a story across and sometimes you’ve got to make the decision to go that way. A lot of people don’t want it. They want to stay subtle.

E.J.: Rina’s written kind of a musical spectacle with “Sawayama.” The album is fantastic when you hear it, but when you see it performed, it’s going to take on another dimension completely.

R.S.: I fantasize about it every single day. It’s so dramatic. I’m not playing stadiums, but I’m still going to do three outfit changes, because the songs have different personalities and I need to bring a different character to each one. Some songs will have choreography. With “Chosen Family,” I’m going to play acoustic guitar. I want it to be a moment with, you know, candles and lighters in the air. And I want to talk to the audience a bit. Because it’s not about me. It’s about how people feel, you know? I hate gigs where it’s all about the artist. That’s so boring. I want people to feel connected to each other. I want people to feel strong.

E.J.: Some people you see live, it just feels like their job — they look like a dustman. I can’t wait to see Rina live, because it’s going to be like a roller-coaster ride. It’s going to be the greatest Six Flags occasion.