The launch of Dolly Parton‘s new ice cream flavor had folks screaming for a scoop, but not quite enough to drop a grand on it … despite the efforts of online hucksters.

Here’s what’s going down — the country music legend teamed up with Jeni’s Splendid Ice Creams to create her very own flavor, Strawberry Pretzel Pie, and it created pandemonium this week … both on Jeni’s website and at its actual store locations.

Because so many customers and Dolly lovers were clamoring for her new ice cream, those who apparently managed to get their hands on some tried to cash in … by listing pints on eBay for $1,000!!! 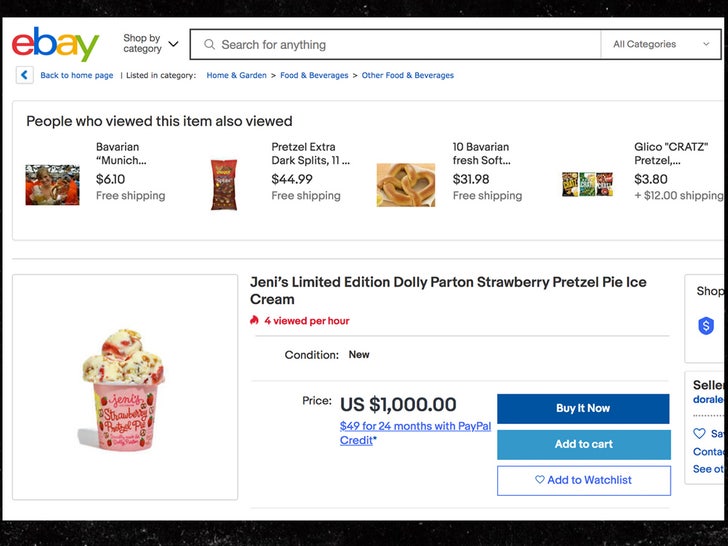 As beloved as Dolly is, nobody was desperate enough for the Strawberry Pretzel Pie to shell out that kinda dough for ice cream in the mail (delivered on dry ice) … but that didn’t stop people from trying to hook a buyer.

That’s not all — other eBay users were hawking the “Specially made for Dolly Parton” ice cream posters from Jeni’s … but at a much more modest $35. Some of those actually sold.

ICYMI … Dolly’s flavor was released April 8 to benefit Imagination Library, a program she founded to gift free books to children from birth to age 5.

Jeni’s said it was only making 10,000 pints, which apparently turned out to be way too few to satisfy everyone’s appetite … and technical difficulties didn’t help either.