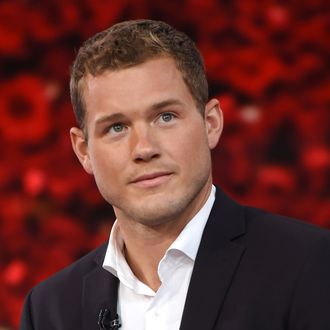 Former Bachelor and future Netflix star Colton Underwood, who came out as gay this week, discussed the allegations made against him by his ex-girlfriend Cassie Randolph, including the claim that he “stalked and harassed” her, according to The Hollywood Reporter. In unreleased footage of his GMA interview with Robin Roberts that aired on ABC News’ Nightline on Wednesday night, Underwood said, “I don’t know if I ever will get the chance to sit down and talk with her. I would like to. I would like to say sorry for how things ended. And I messed up. I made a lot of bad choices.” Underwood and Randolph broke up last summer following two years of dating.

Randolph then filed a restraining order against Underwood last September, alleging that he, among other things, put a tracking device on her car and sent her threatening text messages following their breakup. The restraining order was later dropped in November of last year, after the two reached “a private agreement,” according to People. “I made mistakes in the end of that relationship,” Underwood told Roberts. “And I ruined the good memories we had by my actions and what I did to hold on to being straight, because I didn’t want to look myself in the mirror. So for that, I’m extremely, extremely sorry.” Randolph has not spoken out since Underwood’s interview.